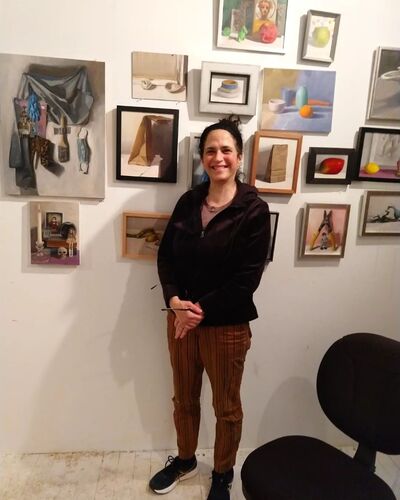 Deborah Pohl’s artistic highlights include winning two Fellowships for painting from the New Jersey State Council on the Arts, one in 2022.  Deborah is currently featured in the NJ State Museum’s Re-emergence exhibit. Deborah’s numerous exhibitions include solo shows at the Hoboken Historical Museum and the Trenton City Museum (awarded by the director of the Aljira Gallery, Newark), and dozens of group shows including the Jersey City Museum, Barrett Art Center (Poughkeepsie),  City Without Walls, (Newark),  Women’s Made Gallery (Chicago) and the AIR Gallery (DUMBO).  Deborah’s solo show at the Trenton City Museum was reviewed by the New York Times.
Deborah Pohl received a BFA from Mason Gross School of the Arts at Rutgers University.   Deborah's painting education continues, as she still takes courses to hone her technique. Being inspired by the atelier movement of the last decade, Deborah has been taking painting courses at the Florence Art Academy, the Grand Central Atelier and the Arts Students League.  Her educational life includes receiving a masters in  counseling, helping Deborah in her desire to create compositions that speak to our humanity and our sense of longing.
Deborah Pohl has always worked at being a community based artist, being a part of three collectives over the years: ART (Artists Representing Themselves) with her peers from Rutgers,  the Agitators who put together street-based ephemeral arts around the Jersey City area and the tART Collective which was an intersectional feminist and anti-racist art collective in New York City (see Wikipedia).
Loading...